The “titled” Porsche driver does not give way, knocks the man off his motorbike before leaving

An authorized Porsche 4WD owner was caught on camera sticking out of the way and making an illegal U-turn in front of oncoming traffic – before narrowly avoiding a collision with a biker.

Misconduct Australia uploaded the footage on June 9, with Subiaco viewing in Western Australia.

The clip shows the rider in the right lane stopping at a crosswalk before advancing cautiously. 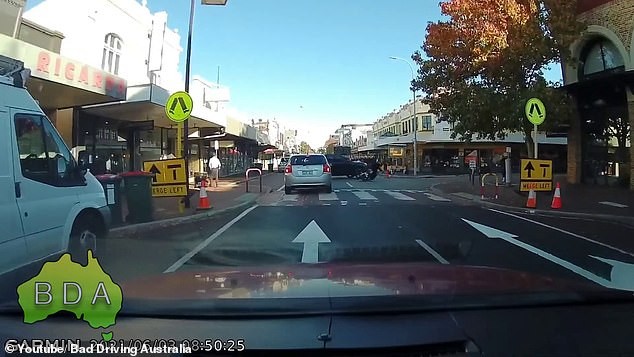 The rider was stopped instantly when the 4×4 did not give way, then illegally crossed several lanes, almost causing a serious accident.

Forced to do evasive maneuvers, the rider can then be seen falling off his motorbike in the busy street, lucky to avoid a prang.

According to the biker, he was lucky not to be “flattened”.

“The Porsche made a U-turn on two (incoming) lanes of traffic as I was about to merge in front of the silver car,” he said on the popular You Tube page.

“He was kind enough to give me a sorry wave before he drove off.

It didn’t take long for people to comment on the video, with one saying the Porsche driver was “one of those special races who thinks the road is theirs.”

One second couldn’t believe that the occupant of the luxury SUV hadn’t stopped to see if the rider was injured, stating it was “very rude”.